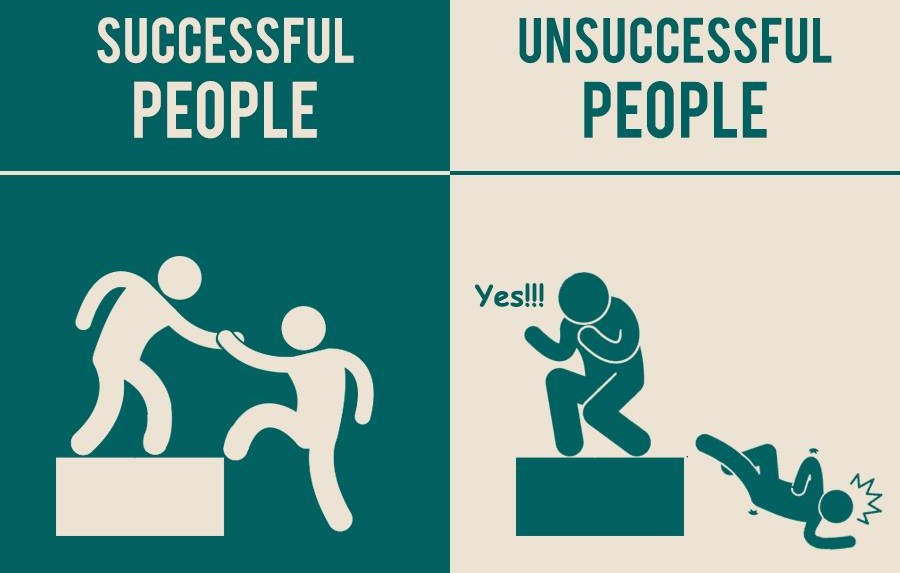 Look around you, have you ever wondered why some people seem to be doing everything right, accomplishing so much like they are born for success? And then there are some people who always seem to struggle and never seem to achieve much?

Well sometimes luck does play a part. But most of the time, if boils down to your mentality and character. People who tend to succeed in the things they do have a very positive outlook in life, whereas negative people find it hard for themselves to achieve their goals.

Here are 7 everyday things that people who tend to succeed do differently from people who don’t.

When you keep learning, you are upgrading yourself. Whether it’s a new skill set, a new language, or a new piece of informative knowledge, it puts you above the rest who don’t know. Also, when you’re learning, it’s not really the end that counts, but the process you took. Sometimes you pick up new habits that helps you learn better, after which you’ll realise you’ll apply it in your daily life too.

People who stop learning tend to get lazy and complacent. And as technology and trends advance, they realise they’re left behind. Which brings me to the next point….

People who succeed sees changes as a challenge and they’ll tackle it head on. In the process of adapting to change, they learn to grow with it. Sometimes through adapting, they see things in a different perspective and come up with better ideas i.e. Innovation.

People who are afraid of change are comfortable being where they are. Changes throw them off balance from their regular routine, causing them to feel insecure and inferior. As they do not progress with change, they remain stagnant and get left behind.

This I see almost everyday in Singapore. No job? Blame the government for bringing in too many foreigners. No money buy house? Blame government for making housing expensive…and the list goes on. I’m not going to bring politics into this but these are just some prime examples of this point.

When you put the blame on others for your own failures, you lose the ability to make the change yourself because you already believe your success is dependent on others.

When you learn to be responsible for your own failures, the first question you’ll ask yourself is “How I can make this better?” Then that’s when you’ll keep improving and eventually achieve your goals.

“To forgive is to set a prisoner free and realize that prisoner was you.” ~Lewis B. Smedes

When you hold grudges, you become grumpy and miserable. People around you will start finding that you are difficult to work with because you become petty easily. When things go wrong, your first reaction is to blame it on others, which is linked to the previous point.

When you forgive others, you learn to see past their flaws and you are devoid of negative thoughts and feelings. This puts you in a better mood and mindset to achieve the bigger things in life.

Well to put it this way, while you’re just gossiping and bitching about people, you fill your minds with useless things. End of the day, the discussion will improve neither you nor the subject you are talking about.

Gossiping about people requires very little mental skill. It requires some memory & attention to details to discuss events. But, when it comes to ideas, you have to know the stuff well & this forces you on the path of learning and innovating.

Ever met a manager or team leader who just criticize mindlessly and does not provide any solution to the situation? How did you feel on those instances?

Chances are, you felt that the person is being ridiculous and unreasonable, right? Generally, you most probably harboured negative feelings.

People who are successful tend to readily give compliments because (1) it takes the attention off themself to do something positive for another person. (2) Giving compliment sparks creativity, you can’t compliment the same person for the same thing over and over again because it’ll become insincere.

People like these become more likable and people prefer to work with them. It easily helps you build rapport with new people, which is something that is especially important in networking.

For negative people, they don’t enjoy seeing others doing better than them. Hence they want others to fail, so they can “always be on top”.  They are very small-minded and judge success based on material achievements.

However when you look at all the successful figures and corporations in the world, you’ll realise a lot of them give back to society. Initiative to groom students, giving jobs to the unemployed, sometimes even helping their competitors (citing how Samsung makes the parts for Apple’s iPhone). What goes around comes around, when you help others, people will remember. And when they make it big one day, they’ll gladly help you too, agreed?

I don’t believe the most successful people are the ones who got the best grades, got into the best schools, or made the most money.  I believe successful people maintain a positive focus in life no matter what is going on around them. They stay focused on their past successes rather than their past failures, and on the next action steps they need to take to get them closer to the fulfilment of their goals rather than all the other distractions that life presents to them.
What do you think?

Love To Write? Then we want YOU!